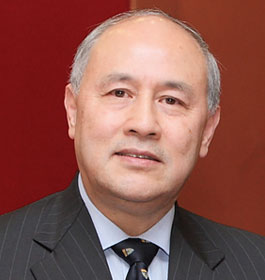 May I welcome you to the website of the 2019 Colloquium on International Law. This year’s Colloquium is the third one in a successful series of the Academy’s Colloquia. The first two were very well attended, and I invite you to get the Proceedings from the Academy’s website.

This year’s Colloquium comes at a time when the world continues to head into uncharted waters. At the time of writing this message, mid-May 2019, it is uncertain whether the United States and China will reach a trade agreement to their long-running trade dispute. The geopolitical issues around the globe continue to affect the lives of ordinary people, as sanctions imposed by the UN Security Council as a multilateral force of global governance and by the United States as a world power determined to impose its self-interest on others, begin to bite, sometimes very hard. Technology is disrupting economies throughout the world for good and for evil. Yet, amidst this chaos, there is hope. One finds growing conviction and desire within many quarters in the world for finding solutions to our problems. It is this growing conviction that motivates and underpins this year’s Colloquium.
We will discuss the underlying causes of this chaos and the foundations of hope for the future. We have gathered a group of distinguished officials, academics, and practitioners to explore four crucial aspects of recent developments on the international stage, against the backdrop of two milestones in the development of international law.
In this year, we will witness the 70th Anniversary of the People’s Republic of China. In the last 40 years, the People’s Republic has opened up to the world and has reformed its economy, bringing hundreds of millions of its people out of poverty. China’s development model is being emulated by many developing countries. One of the core reasons for China’s economic success has been its opening up to the global economy. The global economy is now intertwined with that of China. This success cannot be the result of an accident. Some has ascribed this result to a continuing disrespect for law and the rights of other nations, while reaping the rewards of globalisation. But there is a growing body of robust evidence pointing to the contrary conclusion. In the 70 years since the founding of the People’s Republic, the policy of the country has been to respect the rights of other nations and other peoples, anchored upon the Five Principles of Peaceful Co-Existence. These are, of course, high-level principles and over the last 70 years, a body of practice has developed to give them meaning and practicability. At this year’s Colloquium, we will hear from a senior official of the Republic’s Ministry of Foreign Affairs about these developments.
The Five Principles of Peaceful Co-Existence were formulated and accepted by universal acclaim by the group of non-aligned nations attending the Bandung Conference in 1956. Following this Conference, the Asian-African Legal Consultative Conference (AALCO) was formed as a supranational organisation. AALCO has been an important force in encouraging constructive dialogue and building capacity among its member nations. Hong Kong is honoured to play a part in this effort. This year, we will be graced with the presence of AALCO’s Secretary General, who will speak about the work of AALCO and its hopes for the future. The 2019 Training Class of AALCO lawyers and diplomats will attend the last week of the training in Hong Kong and will also participate in this year’s Colloquium.
In addition to these highlights, this year’s Colloquium will explore four critical issues of international law. They are:

These four topics have been chosen because they reflect significant developments affecting the world since last year’s Colloquium.
The first topic, Spurring Cross-Border Trade and Investment, has been chosen because of the backdrop of the China-US trade dispute and the on-going reform of the World Trade Organization. It is also selected as a result of domestic reforms within China to create the Greater Bay Area Economic Zone, reforming the negative list for market entry and protection of the interests of foreign investors. These developments bear the potential to launch Hong Kong into the next era of economic development as much as the same level of the economic opportunities when China first began to open up in the early 1980s.
The second topic is equally important, as it underlines Hong Kong’s determination to build upon its strong legal foundations to create a better world through effective dispute resolution. Since last year, UNCITRAL has completed its work on the Convention for the Recognition and Enforcement of Mediation Agreements; the Hague Convention on Private International Law has progressed with its Judgments Project; and third party funding for international arbitrations has begun to take root in commercial and investor-State arbitrations.
The Road and Belt Initiative continues to present tantalising opportunities for Hong Kong and Asia in infrastructure and trade, and therefore, there is an obvious need to consider the soft infrastructure which must accompany this vital Initiative. The third session of will discuss the international legal issues arising from this important initiative.
The fourth session on the 2nd day of the Colloquium deals with the topical issue of cyber security. This is an aspect of business and everyday life, which affects everyone and every State.
Much hard work has gone into organising this year’s Colloquium, and it promises to be one of the most informative and thought-provoking events of the Academy. I look forward to welcoming you at the Colloquium.